Thank you for your patience while we retrieve your images.

Fatehpur Sikri located 40 Km from Agra, the deserted city of Fatehpur Sikri was built by Emperor Akbar in 1569, in honor of the great Saint Sheikh Salim Chisti who blessed Akbar and prophesized the birth of three sons to the heirless Emperor.
Akbar used Fatehpur Sikri as his capital and the city was fully occupied for 14 years but slowly became deserted and ruined after Akbar left the city. Scarcity of water was the prime factor for the abandonment of this beautiful city.
Visit the remarkably well- preserved, graceful buildings within the 'Ghost City' including Buland Darwaza, Jama Masjid, tomb of Salim Chisti, Panch Mahal Palace and other palaces that speak of the grandeur and splendour of the Mughal empire at the height of its power.

Later continue the drive to Jaipur. On arrival, check in at hotel The Royal Heritage Haveli. 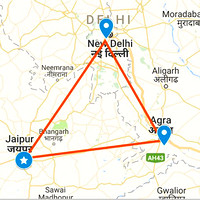